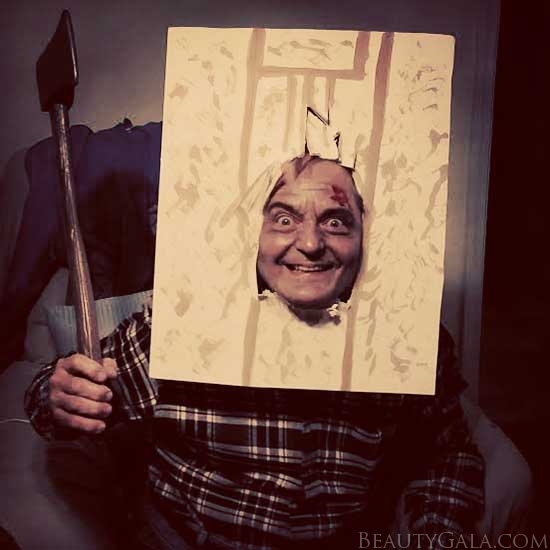 We had absolutely no idea what my dad was going to be for the Halloween party this year up until two weeks before the actual party. The Shining was playing on TV and my sister who is seventeen had never seen it. I basically told her to sit her butt down and pay attention because it’s one of those movies you have to see at least once, just to form an opinion on a classic. This movie was one of the first scary movies I saw as a young teen, and it scared the living daylights out of me because of the descent of madness Jack Torrance experiences. I knew it was a literary masterpiece because I’ve been a huge Stephen King fan since I was a kid. Jack Nicholson does a perfect job of portraying the role and my dad has similar features to Jack Nicholson, in terms of big eyes and that crazy big smile. As soon as we were finished watching it, it clicked. Dad had to be Jack Torrance from The Shining for Halloween.

The entire costume is homemade. If you still need a last second Halloween costume idea or you’re heading to a party this weekend, this is a great “throw together” costume idea for you. Full details inside,

WHAT YOU WILL NEED: 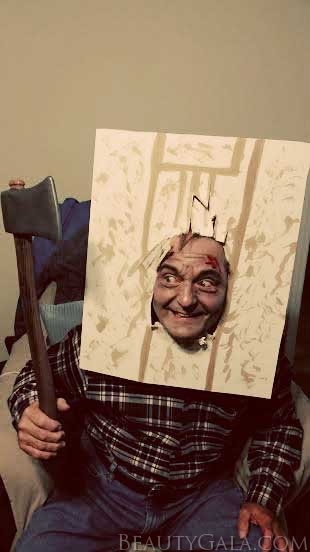 Most people already have a flannel plaid shirt in their wardrobe or can borrow one. We purchased one that looked similar to Jack’s at Goodwill. Wear jeans and a belt. The whole look is meant to be very 1970’s blue-collar worker. The fake axe is a prop you can get at any Halloween store for about $5. I used a piece of posterboard I already had in the house and cut it into a rectangle to look like the infamous door-frame that Jack sticks his face in. Using an X-Acto knife, I cut into the posterboard and frayed the edges around where his face would be to look like a real axe had been chopping through it. The messier the better, and the more “panels” you cut, the more it will look like a door. I painted the posterboard with some wood stain we had and drew some panels and some messy prints everywhere since the door was pretty messed up after Jack got to it in the movie. 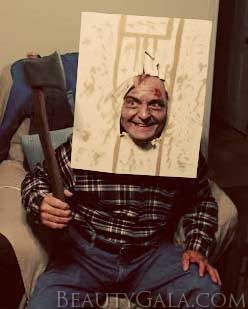 For the makeup, I used a light grey and white paint to make him look paler and sick. I used my LORAC Mega Pro Palette and a flat makeup brush to push matte grey’s and brown’s into the wrinkles on his forehead, nose, and underneath his eyes. This made him look much more angry and highlighted those “frown lines” that Jack had. I did the same thing around his smile lines and nostrils, and used a fluffy brush to make the area underneath his eyes a dark brown-grey. This gives the illusion of insomnia and craziness! I filled in his eyebrows to make them look darker and more arched (crazier!). I also applied a bit of gel blood to his forehead because at this point in the movie, he had been injured and through hell. Feel free to be imperfect with the makeup because Jack was really off the deep-end at this point in the movie. As long as you are going for the crazed-insomniac murderer look, you will achieve the point.

For my dad’s hair, I slicked it back with gel and a comb, leaving a tiny piece across his forehead, exactly as Jack did in the movie. 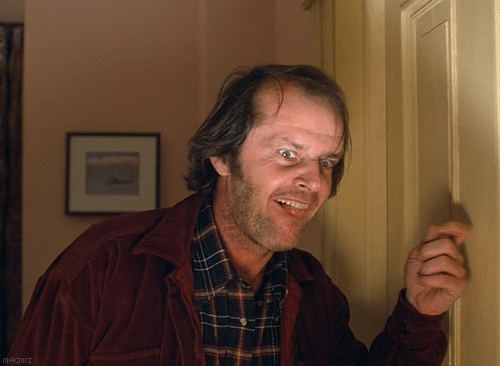 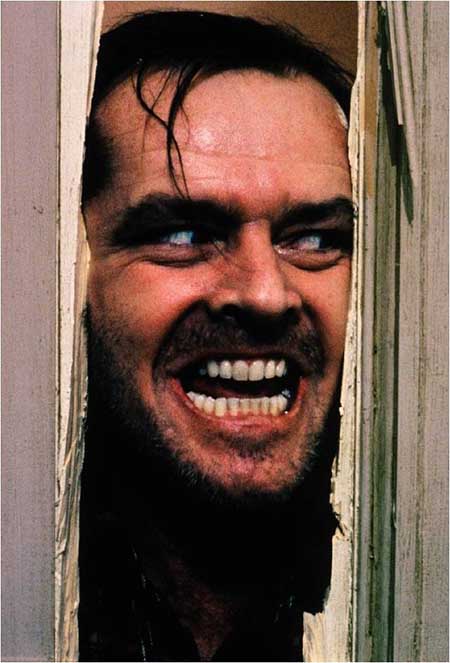 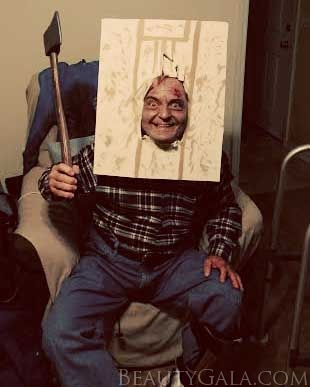 Lastly, stick your face through the hole in your posterboard. Be sure to yell “HEEEEEEEEERE’S JOOOOOHNNY!” when you walk into your Halloween party. My dad did and the entire room erupted into laughter. He really sold the costume well. 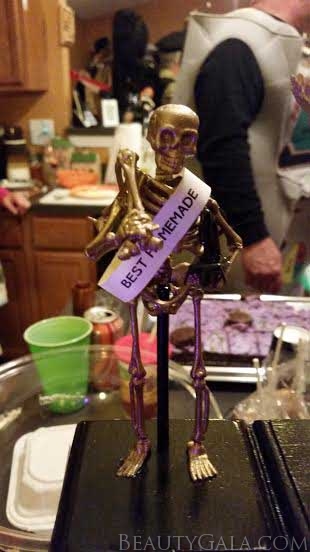 Dad won the award for “Best Homemade” and it had the cutest little sewing machine attached to it. I absolutely LOVE these awards. They were handmade by the party hosts and they are so creative.

To turn this into a couple’s costume, you can have one person go as Wendy Torrance!

I hope you all have a very safe, happy Halloween and that some of my costume and makeup idea’s and tricks have helped you out.

[ALL PHOTOGRAPHY ON THIS SITE IS TAKEN BY REBECCA KAZIMIR. NO PHOTOGRAPHS ARE TO BE REPRODUCED WITHOUT WRITTEN PERMISSION.]